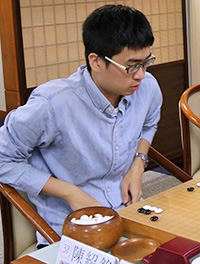 ●Comment
Thanks to the host and every opponent , I think maybe I have a liitle more lucky to win the contest. 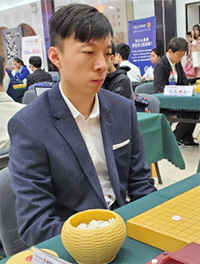 ●Comment
I am from AnHui Province,AnQing City of China.
My real name is 路玉.My English name is Yu Lu. Now,I go in for studying pure mathematics and like Go game. I am an amateur Go player who is 7 dan.
At ordinary times,I often read Go books
and I play Go game on Tencent WeiQi Net with others or PANDA NET
on line to improve my level of Go game.
I am looking forward to make friends with people all other countrys or zones.

If you click your class, you can see your results.

There are five categories. One is the Main Class and the others are Ranked Classes (A-C Classes).

*If you are 6-dan or above, your class will automatically be the Main Class.
*People who hope to participate in the A～D Classes and have not had their Pandanet rank confirmed need to play at least 20 games and to have their rank confirmed by July 21. If a question mark appears next to the rank, it means the rank has not been officially confirmed by Pandanet.
* Participants will play with the rating as of July 22 (6 a.m., Japan time).Your class will be decided according to your rating.
* Your rank will shown inside the room on the day.
* This year we are not holding regional preliminaries or regional tournaments.
*Players who have reached the final round from the 20th tournament on will be seeded into the class above from the following year or into the class for their current rank, whichever is higher. Players who reached the final round of A class will compete in the open class from the following year on.

• In the playing rooms for each class in the preliminary round, players will play freely and must play at least six games within the designated period (games with the same opponent will not be counted). • Placings will be decided by the following method.
• In the open class, 16 players will qualify for the final round and 8 players each in the other classes.

The ranking is determined by points in descending order.

• In the Final Rounds, single eliminations are played until a champion is determined.
• The pairings will be decided by the office by drawing lots.
• In all classes, all rounds are rounds with mixed groups.
•On the tournament day, games will be played within the specified time at the time agreed to by both players and will be conducted in the specified room.
•Regarding the dates and times for Final Round games, please contact your opponents directly on the 'Net social plaza' page. In principle, please use Japan Standard Time (JST) when deciding the dates and times.
*NOTE: JST=UTC+9.

3rd to 16th place
Prizes will be awarded.

1st to 8th place
Prizes will be awarded.